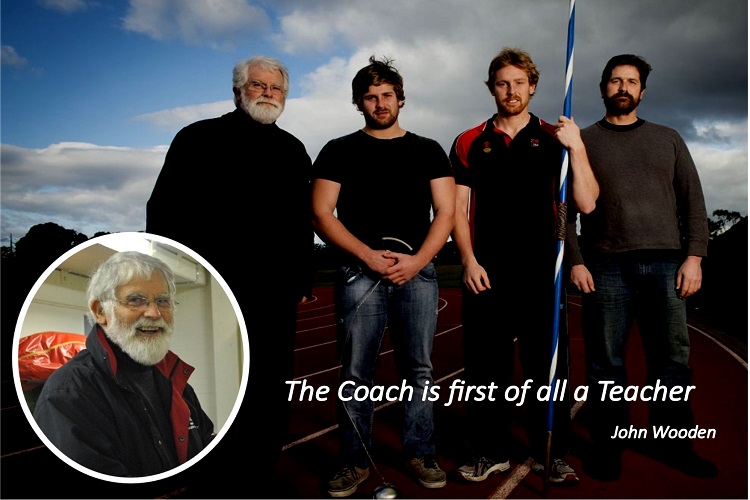 The University of Tasmania Athletics Club is saddened by the passing of founding member John Peacock.

A teacher by trade, John taught at Elizabeth College where he introduced, and actively promoted the subject of Sport Science. John’s passion for athletic pursuits and encouraging an active, healthy, lifestyle saw him coach various sports throughout his time. Gymnastics, diving, squash and AFL all benefited at one stage or another from his guidance, however it is athletics where his legacy will most live on.

For more than a decade, John joined son Evan in developing athletes, particularly in the throwing disciplines. While Evan largely oversaw the technical side of the throws, John delivered his agility program to the squad, teaching athletes the benefits of flexibility, balance and control. Games were used to engage athletes, with the focus always on the fun side of sport, while assisting athletes in developing to be the best they could be. John focused on measuring athlete’s improvement in areas outside of the field of play, and the improved results always reflected improved results in competition. He was also a strong proponent of embracing the psychological side of sports performance; visualising the throw was always encouraged, ‘look at where you want it to land’ was often heard, as was ‘performance is 95% mental’.

John had a fondness for Shot Put and would generally oversee the training of this event for the squad. He put the Shot himself as a junior athlete and in recent years, taught many the explosive skills required to improve in the event. Rebecca Direen and Alice Cox benefited greatly from John’s dedication, both showing significant improvement under his tutelage, with Alice etching her name in the record books on more than one occasion.

While the many athletes John supported enjoyed success at State, National & International levels, including grandsons Hamish and Huw, and squad members Geoff Gibbons, Danni McConnell & Mikayla Genge, John was just as happy to help those who were starting out in the sport. Junior athletes, Emily Canham, James Gravina & Julia Direen all enjoyed the benefits brought about by his agility programs. Masters athlete Geoff Gibbons was an enthusiastic participant in the agility sessions, Geoff’s fondness for John and his guidance were evident to all – and the feeling was mutual, with John often expressing his immense respect for Geoff and his many achievements.

A keen gardener, John would regularly arrive at the track with bags of vegetables fresh from his garden to share with anyone who would enjoy them. Silver beet, zucchini’s & tomatoes among his harvest, some would make their way back to him after being converted to soups or frittata’s, though it was never expected. John also loved to exercise, it was a regular sight to see him walking through North Hobart, or up Cleary Gates to the track for training. Lifts were often offered, and mostly refused, until the darkness of Hobart’s Winter set in and he was quietly relieved for a lift home.

As an art enthusiast, John paid particular interest in the works of those studying the subject, always with kind words of support and encouragement. In fact, he showed an interest in all study undertaken by the squad, though long retired from teaching, his desire to see those around him improve themselves through education was evident.

While health troubles have kept him away from the track over the past 18 months, John did join us briefly in February to watch Hamish compete in an invitational Javelin event at the Domain. With his ‘Johnpa’ watching on, Hamish launched the spear beyond the 80m mark for the first time in two years. John’s pride was on display that day, as it always was when speaking of his family.

John’s positive impact on the sport will be felt for many years to come. Always the teacher, his training methods have formed part of the programs our next generation of coaches are implementing with their athletes today.

Our sincere condolences to the Peacock family.

“The Coach is first of all a Teacher” John Wooden