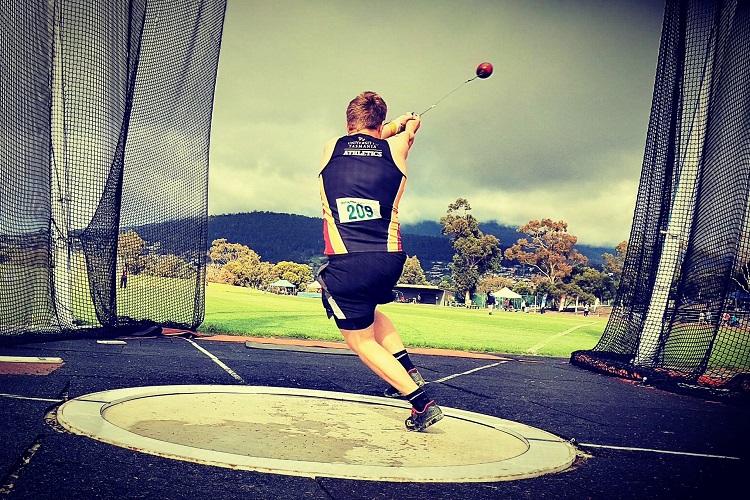 CALEB KIRKPATRICK has ended 2020 on a high, climbing to the top of the Australian Rankings in the U17 Hammer Throw.

It was just two short years ago Caleb picked up a Hammer for the first time. Having his first competition in February 2019, Caleb recorded a throw of 23m with the U16 4kg implement. Fast forward to December, and Caleb ended 2019 with a best of 55.61m under guidance of coaches Evan & Huw Peacock.

With the new year came an increase in implement weight, with Caleb moving from the 4kg Hammer to the U18 weight of 5kg. Despite the challenges 2020 has delivered, Caleb has maintained his commitment to training and his improved results throughout the year have been a deserved reward.

Caleb opened 2020 with a throw of 41.99m with the 5kg implement, and despite the cancellation of the Australian Junior Championships, Caleb’s dedication to training has seen his results steadily improve throughout the year.

The Tasmanian All Schools in October was the first State meet of the season, and Caleb delivered a personal best of 56.32m, exceeding his best distance with the lighter 4kg implement. With the Australian All Schools cancelled due to COVID, Caleb’s has had to be satisfied with local competition to end 2020, competing against his coach Huw Peacock for bragging rights about who throws the furthest with their respective weights at local interclub meets. The final Hammer competition for 2020 was held at the Hobart Interclub meet on the 6th December, when Caleb ended the year on a high, throwing a new personal best of 57.95m, making him the number 1 ranked Hammer thrower in Australia in the U17 age group. Congratulations Caleb!