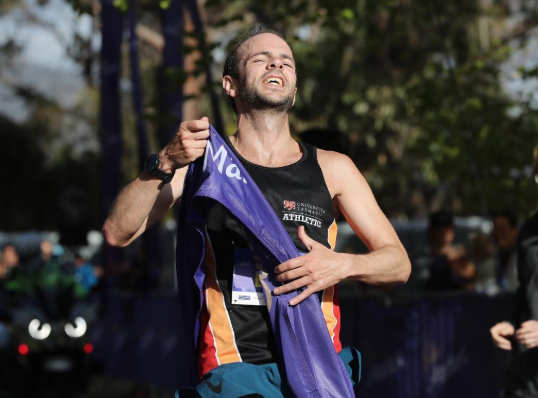 The Tasmanian Marathon & Half Marathon Championships were held in conjunction with the Cadbury Marathon this morning PLUS the Tasmanian Combined Events Championships were held across the weekend at the Domain – and didn’t we see some super results!
Nick Earl and Milly Clark were the stars of the weekend, both athletes breaking course records to claim overall victory and the State titles in the Marathon & Half Marathon respectively. Nick lit up the marathon course from the get go, taking an early lead which left him with just Josh Harris who was riding the lead bike for company throughout the 42km event. Nick finished in an incredible 2:18.39, taking over 5 minutes off the previous record for the event.
In the Half Marathon, Milly Clark set out to claim the course record as part of her preparation for the Tokyo Olympics, finishing first in the Women’s event and an amazing 9th overall for the 21km course. Milly ran 1:13.01, reducing the previous record by over a minute and setting a new Tasmanian Open/Allcomers record in the process. Aaron Harvey impressed in the 10km event, finishing second overall, with Josh Harris stepping off the lead bike for the Marathon to finish third. Perhaps the most impressive result from the event was Milly Clark’s second run for the day, when she took out the 10km event AFTER her Half Marathon victory in a slick 34:01 – one of the best times ever recorded by a Tasmanian over the distance. Full member results below.

At the Domain, Tassie’s best Masters athlete Geoff Gibbons made a much welcomed return to the Combined Events, taking out the Men’s Open Decathlon while Andrew Bonsey was victorious in the M40 Decathlon. Day 1 of the Decathlon proved challenging for all with strong winds hindering performances. Day 2, the ‘decathletes’ day delivered better conditions, with both Geoff and Andrew finishing their 10 events with strong runs in the 1500m. Congratulations to everyone who competed across the weekend and thanks to all Officials & volunteers who assisted at both events.